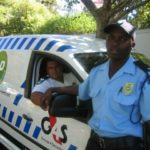 In true spring cleaning style, our GP/OKCID team has been cleaning up the streets this month and trying their best to keep the areas safe. Our mobile team and GP/OKCID officers have been ensuring that crime levels are kept as low as possible.

During the month of August, our GP/OKCID team continued with regular operations and made 7 good arrests, with the assistance of SAPS.

This month saw a decrease in the number of suspected drunk drivers and car break ins. However with a few incidences still reported of drunk driving, it is still something that needs to be addressed, citizens are urged to use alternative transportation options, such as a cab or MyCitiBus to get home.

The month of September saw numerous incidences of cellphone theft. Most of the people that were robbed of their possessions were carrying their cellphones while walking. It is advised that if you are walking far distances that you shouldn’t flash your valuables, as you do unfortunately become a target for crime. If you plan to walk in an area that is dark or secluded, phone one of the GP/OKCID officers before you leave and ask them to walk with you to your destination. 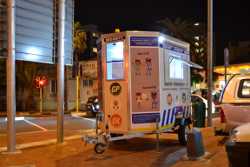 Following on from last month, evidently there are still people leaving their valuables on display in their cars. Our mobile drivers try their very best to watch these cars, however to make your lives and theirs easier, it is advised that you remove all valuables when leaving your car parked on the streets.

Below are a few specific incidences that occurred in the area:

In Green Point on the 28th September 2014, our GPCID officers apprehended a suspect that had broken into a vehicle. He was taken to SAPs central and SAPS Constable Sebrandt reported the matter.

On the 26th September our Mobile 5 GPCID officers apprehended a suspect that had stolen 3 cell phones outside the BP Garage. One of the cellphones was recovered and returned to the owner, SAPS Constable Titus was on the scene.

Our GPCID officers were quick on the scene on the 14 September to apprehend a suspect trying to remove a GPS from a vehicle. The suspect was taken to SAPS Central and arrested by SAPS Constable Mbovu.

The Oranje-Kloof area this month saw very little reported incidences of crime, however a number of car collisions occurred in the area, either from reckless or drunk drivers.

On the 26th September a Joint Crime Free Operations was conducted on Somerset Road, Kloof Nek Road and Kloof Street. The operations was held in partnership with SAPS and CCID. The area was cleared out, several arrests were made and officers patrolled the area looking for any other suspicious activity.

With summer season around the corner, we kindly ask that when walking on the streets or driving around in your car, that you stay alert and safe at all times.