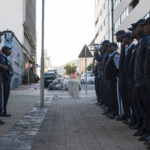 During November 2014, our GP/OKCID team continued with regular operations and made six good arrests, with the assistance of SAPS.

There was an increase in the number of car break ins in Green Point. A majority of the incidents involved people leaving valuables (predominantly laptops and cell phones) inside their vehicles. This becomes a target for crime, and our GPCID officers cannot be everywhere at once. If you are going to leave valuables in your car rather leave them locked in your boot away from sight, or better yet, take them with you wherever you might be going.

There were also seven car accidents during November in the GP/OKCID area. Most of the cases involved reckless driving. Always remember to wear a seatbelt no matter the distance. If you are over the drinking limit, rather take a reliable taxi service home or phone one of our GP/OKCID officers to walk you home, if it’s within walking distance.

Here is a summary of some of the incidences that occurred:

In Green Point on 8 November, our GPCID Mobile 6 officers apprehended a suspect that had broken into a vehicle. SAPS Constable Potgieter was quick on the scene and arrested the suspect.

On the same day on High Level Road, three pedestrians were robbed of their cell phones. Our Mobile 5 and GP4 officers apprehended the suspect who had stolen the phones and SAPS Sargent Lindah immediately arrived on the scene to arrest the suspect. Pedestrians are advised to carry pepper spray with them for incidences like this.

On 11 November, at the Caltex Garage on Orange Street, a suspect stole merchandise from the Caltex shop. The manager of the shop phoned our Mobile 6 officers who responded and arrived at the scene to apprehend the suspect. SAPS Constable Madotyeni arrived soon after to arrest the suspect.

In Oranje Kloof on 2 November, inside the Lifestyle on Kloof parking lot, a lady who was walking back to her car was held up at knife point by two male suspects. The suspects then demanded money from the management office; however once the OKCID officers and SAPS were called out to the scene they had already run away. Constable Madotyeni and SAPS Forensic Sargent Burger were on the scene. This incident serves as a reminder that even in a closed parking you need to constantly be alert and aware of your surroundings.

The festive season has arrived, with Cape Town becoming busier as family and friends come visit for the holidays. We strongly advise our visitors to stay safe and aware at all times. If you are ever lost or feeling unsafe in an unfamiliar area, please call one of our GP/OKCID officers. As for residents in both areas, we suggest that you give your guests all of the useful contact numbers for emergency situations: