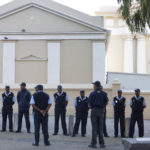 During January 2015, our GP/OKCID team continued with regular operations and made 19 arrests, with the assistance of SAPS.

There was an increase in the number of car break-ins in both Green Point and Oranje-Kloof. Parking on the streets leaves your car at risk of a break in, this is something all residents should keep in mind. Our GP/OKCID officers often notice valuables on display and try their very best to keep a watchful eye over these cars. However to make our job and yours easier, avoid the possibility of a break in all together by taking valuables out of your car.

There were also seven car accidents in January in the GP/OKCID area. A majority of the incidences involved drinking and driving. Quite a few of the incidents involved pedestrians being hit by reckless drivers. Please keep a safe distance from traffic when walking on the pavement, to avoid any injuries.

Here is a summary of some of the incidences that occurred:

In Green Point on 4 January, our GPCID officers noticed a car that had been broken into on Waterkant Street. Our GPCID team tracked down the owner, who said there was a watch and large bag that had been stolen from the car.  A tip off to our M10 officers allowed our officers to locate the two suspects in the Bo Kaap, the large bag was recovered and SAPS Constable Stevens arrested the suspects.

On the same day on Waterkant Street, two suspects were apprehended by Mobile 5 who had broken into a grey Polo. SAPS Constable Peterson was on the scene to arrest the suspects.

On 5 January, Blake’s Restaurant on Buitengraght Street was broken into. Suspects stole a plasma TV, coffee grinder and alcohol. SAPS Constable Tolobisa was at the scene to take a statement.

On 19 January Mobile 5 received a complaint from someone at St George’s Square where three suspects robbed two foreigners. Mobile 5 chased them down and managed to stop the taxi at Chapini Square, where the suspects jumped out of the vehicle. Our team managed to retrieve the handbag and returned it back to the owners. Metro Officers E.S Page and J .Slinger arrested the suspects after tracking them down.

In Oranje-Kloof on 23 January outside More Quarters apartments on Nicol Street a suspect was apprehended by our officers inside a car. The owner was located but did not press charges as there was no forced entry.

On 31 January a suspect was apprehended by Mobile 6 trying to climb into houses on Welgemeend Street. SAPS Constable Madotyeni profiled the suspect and gave him a warning.

We ask kindly that residents are more aware of their surroundings this year and take care when walking on the streets. If you ever feel unsafe please call: 071 670 3019/ 072 944 6811 and we will be more than happy to walk with you to your car or home.