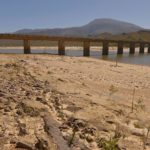 Cape Town – The City of Cape Town has rolled out Phase One of its Critical Water Shortages Disaster Plan and pre-selected suburbs can expect dry taps during peak hours.

Water rationing through extreme pressure reduction is underway, the City said on Monday.

Under Phase One, pre-selected suburbs can expect water supply disruptions for short periods of time with outages likely to occur in the mornings and evenings.

“The new normal requires us to adapt the way that we have been doing things, in all aspects of our lives,” Limberg said in a statement.

The City of Cape Town aims to keep water consumption below 500 million litres per day.

Limberg said the City of Cape Town will “shortly be launching one of its key initiatives”, calling on tourists and residents to “Save like a local”.

She said the awareness campaign will include airport billboards, branded flags in the CBD and Waterfront and mobile billboards on beaches and tourist centres.

The city also reached out to cellphone service providers to see how they can help spread awareness, Limberg said.

“We can expect a bumper [festive] season and we will need all visitors to save like a local and follow the example of many of our water ambassadors.”

Additional restrictions and lower water usage targets will be put in place if required, she warned.

“Our experience shows that the local outflow of people over the festive season and the closure of some businesses and industry, such as the construction industry, mostly balances the inflow of local and foreign tourists.”

“We had a productive meeting and I remain confident that all three spheres of government working better together can pull the province through this drought,” he said in a statement.

The local government, environmental affairs and development planning ministry is due to appear before Parliament’s water and sanitation committee during the course of the week, Bredell said.

Read the full statement from the City of Cape Town