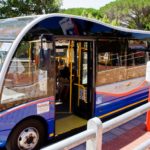 The City of Cape Town urges residents and visitors to use public transport as far as possible during the festive season. Road users should note that the City will intervene to alleviate traffic congestion along routes to popular destinations as from mid-December 2017 until the first week in January 2018. Read more below:

The City’s Transport and Urban Development Authority, in conjunction with the City’s Traffic Service, will over the next five weeks intervene to prevent and alleviate gridlock conditions along the Atlantic Seaboard and the False Bay coastline between Strandfontein and Muizenberg.

‘We have been implementing this strategy for the past four years and intend to do so once again. The interventions will happen on an ad hoc basis – thus, as and when needed. More importantly, the interventions may affect those travelling in private vehicles in particular. I therefore urge residents and visitors to make use of public transport as far as possible,’ said the City’s Mayoral Committee Member for Transport and Urban Development, Councillor Brett Herron.

The MyCiTi service has a number of routes to and from popular spots across Cape Town – in particular to and from Sea Point, Bantry Bay, Clifton, Camps Bay and Hout Bay.

‘Traffic congestion has become a regular occurrence along the Atlantic Seaboard during the holiday period. The best solution remains to avoid travelling to this area in private vehicles, and to rather opt for public transport, walking, and cycling as far as possible. The MyCiTi service offers a hassle-free option for those who do not want to be stuck in gridlock traffic while searching for limited on-street parking,’ said Councillor Herron.

Visitors can park their private vehicles in the city central business district or foreshore area and use the MyCiTi bus service or any other public transport service to reach the beaches along the Atlantic Seaboard, in particular on 26 December 2017 and 1 January 2018, which are popular beach days in perfect weather conditions.

Those who have visited the Atlantic Seaboard during the festive season in prior years will know that parking is limited and that it can easily take two to three hours to travel between Sea Point and Camps Bay by car.

Interventions will take place on an ad hoc basis at the main entry points to the Atlantic Seaboard as and when gridlock conditions necessitate it.

In Sea Point and Bantry Bay, interventions may take place at the following intersections:

In Camps Bay, interventions may take place at the following intersections:

‘MyCiTi buses, coaches, minibus-taxis and tour operators will have preferential access to the Atlantic Seaboard during the interventions. Those travelling in private vehicles may be stopped at these intersections and redirected back to where they were coming from until the traffic congestion has been alleviated to an acceptable level. Thus, private vehicles could be directed away from their desired destination for as long as it takes for the gridlock situation to subside,’ said Councillor Herron.

The roadworks along Main Road, one of the Southern Peninsula’s most scenic access routes, were completed last month. Residents and visitors to the suburbs of Muizenberg, St James, and Kalk Bay can now fully enjoy the benefits of Main Road, but should expect heavy traffic during the festive season.

Road users should also expect delays along Kommetjie Road (M65), and Ou Kaapse Weg (M6) between Noordhoek Road and Kommetjie Road, due to the major upgrades taking place along these sections.

The roadworks will be suspended as from 16 December 2017 until 7 January 2018, but the traffic flow will be affected along Kommetjie Road in particular as the road is very narrow along certain sections, with restricted walkways for pedestrians.

Visitors to Table Mountain are also strongly advised to make use of the MyCiTi service as Kloof Nek Road becomes congested during the festive season. There is also limited parking available in the vicinity of the cableway station.

‘The MyCiTi shuttle service to the Upper Table Mountain stop is free of charge, meaning visitors need only pay on Route 107 (Camps Bay) from the central business district to the top of Kloof Nek Road, where they can disembark at the Kloof Nek Stop situated at the Kloof Nek Road/Tafelberg Road intersection. From there, commuters should transfer to the Route 110 bus – the free Table Mountain shuttle service – to the Upper Tafelberg stop and disembark at the cableway station,’ said Councillor Herron.

The same applies to passengers who are departing from the cableway station: they embark at the Upper Tafelberg stop and will transfer to MyCiTi Route 107 at the Kloof Nek Stop at the Kloof Nek Road/Tafelberg Road intersection.

Commuters are reminded that they need a myconnect card to travel on the MyCiTi bus service. A myconnect card can be purchased for R35 from selected station kiosks and participating retailers across the city.

The City will also extend the operating hours of the MyCiTi bus service on routes to the V&A Waterfront and Canal Walk, and the beaches on selected days during the festive season.

Visitors and residents are advised to visit the MyCiTi website at www.myciti.org.za for more information about the timetable changes, or to phone the Transport Information Centre on 0800 65 64 63.