Hope for the city through the Salesian Institute Youth Projects 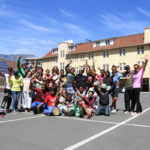 44% of the population in the Western Cape is under the age of 25. Nearly a third of these people live in poverty, and one in five suffer from lack of basic needs and often have to survive extreme conditions with no support.

Located on Somerset Road in Green Point, the Salesian Institute Youth Projects is doing their bit to change that by providing ‘education, shelter and emotional support for at-risk young people.’

There are a number of programmes which youth can be involved with, depending on their life stage and needs. Here is a list taken directly from their website:

Classes for children and youth who have dropped out of school or who do not have the skills to pass their matriculation exams, including: woodcraft and timber, electrical, hairdressing and hospitality studies.

Assistance to young men and woman between the ages of 18 and 30, that want to obtain training to prepare them for work at sea, gaining employment in the fishing industry.

We give innovative, customised support for at-risk youth. Our community outreach program, works with prisons, schools, other NGO’s and NPO’s, to develop Partnerships that will allow them to find those most in need and bring them into the programmes, as well as support those who are in danger of falling into real trouble.

There are a number of young people whose lives have been transformed through the programme. One of them being Warren Stevens, a 27 year old who grew up in Mannenberg in an unstable environment, where both of his parents were addicted to alcohol and drugs. The little income generated was spent on this indulgence and Warren, the eldest, was left to take care of four siblings.

‘My biggest drive was to have a plate of food every day. This was not our kids’ fault, why did we have to suffer like this?’ he says, adding, ‘We were desperate but there were good people that helped us.’ Warren did odd jobs around the neighbourhood for a menial amount and didn’t have proper clothing or shoes. This led to children teasing him at school at which point he dropped out and got involved in drugs.

Warren heard of the Waves of Change Program at the Salesian Institute which trains young people to work in the maritime industry. He enrolled and after following the programme found employment on a private fishing vessel. Earning a salary has made a great impact on Warren’s self- esteem and allowed him to provide for his family.

‘I will work hard and save my income – so that I can take my family to a safer suburb where we can live and prosper. I never want my children to go to bed hungry like I did.’

Another one of the institutes many success stories is that of Ayabonga Ngope who is currently a student at the Learn to Live School of Skills in Year 4. He is a young man of integrity and in his quiet manner would stay behind and clean up the dining hall after lunch when the other children had left without any prompting from the teachers.

This exemplary behaviour was noticed and they looked for a way to reward his efforts. The teachers knew that Ayabonga loved to cycle but could not afford a bicycle, so they searched the Salesian premises and found an old bicycle. This was refurbished and awarded to him.

Ayabonga had visited his grandparents over the holidays and it was discovered that he had gifted his bicycle to his grandfather to use for transport. This did not go unnoticed by the Salesian staff and their supporters.

Johan Fourie, the General Manager at Doolhof Wine Estate, heard about this story. He decided to donate the bicycle he used to ride his first Cape Epic Race, to Ayabonga. This encouraged Ayabonga to join a cycling club in Hout Bay which he is still a part of.

His dream to ride a three-stage cycling event is set to come true as he has been offered to ride the Wine2Whales this year with Angelo Casu, the Manager of the Grand Dedale Country House in the Winelands. Angelo has also donated a mountain bike cycling kit to Ayabonga, to further help him on his way.

Ayabonga will complete his schooling this year, and sincerely thanks all the donors for their contributions in assisting the Salesian Institute Youth Projects. He, and so many others are able to reach their potential through the programmes offered. We would like to ask you to consider donating to the cause so that young people in our country can change their circumstances and have hope in a better future.