GP/OKCID assists with 13 arrests in June 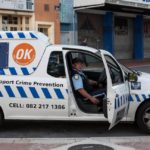 Our GP/OKCID officers have been hard at work over the chilly winter months, braving the cold streets and still helping to combat crime. In Oranje-Kloof there were three reported incidences of reckless driving which resulted in car accidents. On 16 June on the corner of Orange and Rheede Streets, a white VW Polo with seven passengers lost control and ended up against a lamp post. The passengers were injured and immediately taken to Somerset Hospital by ambulance.  We ask residents to let us know when there has been an accident.

There has been a sharp increase in the number of motor vehicle break ins, especially in the Green Point area, with 10 reported cases in June. Most of these cases were reported in the early morning or late in the evening. Please be particularly alert when it’s dark, as it is easier for robbers to break in when our GP/OKCID officers are not able to witness the theft.

We also had a number of reported incidences of informal car guards acting violently towards pedestrians and sometimes even damaging vehicles. We are addressing this issue and ask that you park in parkades or somewhere where there are parking meters at night.

On 15 June, the driver’s side window of a white Land Rover parked in Hofmeyer Street was broken into.  Fortunately the suspect was apprehended by our GPCID officers and the owner’s belongings were safely returned to him. SAPS Constable Myeko was on the scene to arrest the suspect, and opened a case against him.

Working with SAPS, the GP/OKCID conducted a joint operation on 19 June in Green Point, where they apprehended and arrested four suspects for car break ins.

On 29 June a male suspect stabbed a lady with a knife on Napier Street. Our GPCID officers, with the assistance of SAPS Constable Lottering, were on the scene to apprehend the suspect, who was  arrested immediately and taken to the police station. The female pedestrian was transported to the nearest hospital.

On 8 June, while our OKCID vehicle was on patrol, a suspect was encouraging vehicles to park illegally on Kloof Street. When our CID officers asked the suspect to leave the area he reacted violently and attacked them with a metal pipe. If you see or experience this type of behaviour we strongly urge you to report it to our CID officers immediately.

On 89a Kloof Street a table valued at R9 500 was stolen while the owner was waiting for the delivery truck to come pick it up. The two male suspects tried to carry the table away but our OKCID officers along with SAPS Constable Linden were on the scene to arrest the suspects.