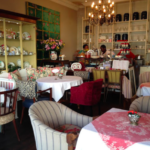 La Petite Tarte is a home away from home for many Green Point residents. It’s been in the same spot for 13 years and has only changed ownership twice in this time. That said, it has unwaveringly remained true to its French roots and still boasts the same bit of Paris that it did when it first begun.

It is a quaint little café – much like you’d find on the streets of France. That’s their secret, they always have French on the brain. From their coffee, to the pastries, to the conversation you’ll have with the servers, you’ll be transported without even having to get on a plane.

In Summer, you’ll find the place flooded with tourists who always manage to make their way to this spot despite the possibility of getting lost in the grandeur and bustle of Cape Town. Like we said, this is “home away from home” and not only for the residents. Winter sees a lot more of a local crowd – some of whom have been coming to dine for the better half of ten years.

Antonio, the current owner, says that the most interesting thing for him at the moment – and almost amusing – is the number of women who are found in La Petite Tarte. The days are filled with chattering and laughter and kitchen teas and baby showers. He laughs as he talks about how some days it’s hard to even spot one man in the shop – but he doesn’t mind one bit.

Their food is always fresh, the coffee is always hot, and the atmosphere is always welcoming. It has an element of sophistication that can’t be mistaken and yet anybody is invited in with a smile. The café has received so much attention that last year October, they had to expand their hours to include dinner as well. If you do find yourself there at night, you can expect a fusion of Latin American food and Mediterranean food – a delicious mix.

Antonio recommends though, that no matter the time of day, there are two must-try menu items: the first is their chicken pie – it’s nostalgia and happiness in a mouthful, and secondly, the carrot and walnut cake. If you’re feeling adventurous on a cold winter’s day, this is where you want to be. In fact, instead of having just one, try both!